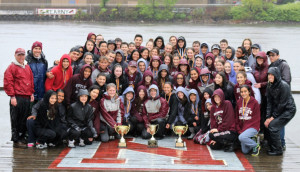 While most of the athletic community was shut down on Saturday due to rain, the Nutley High School Crew Team took to the water at home, on the Passaic River, to compete against the other local teams who share the river, Belleville, Kearny, North Arlington, Seton Hall Prep and St. Benedict’s Prep, in the Passaic River Sprints.  The race marks the end of the regular season of racing, but much is at stake in this small, but very meaningful, season – culminating race, as three overall team trophies are up for grabs. The Raiders rowed through the rain, showed their grit and skill, and walked away with a clean sweep, winning all three team trophies: Girls Team Points Champions, Boys Team Points Champions and Efficiency Champions for highest winning percentage of boats entered into competition.

The boys team had their best performance of the year, winning four races to just edge out Kearny for the team title.  Once again, the boy’s lightweight crew with coxswain Charlie Scorsone and rowers Matthew Scorsone, Max Wechter, Andrew Irwin, and Owen Morris, rose to the challenge winning both the light 4 and lightweight 8 events to lead the way for boys’ team.  Nick Harabedian, Max Megglio, Luis Hordista, Tyler Armstrong, and Jason Mui doubled up rowing as half of the light 8 and as members of the JV 8 or novice 8, collecting two gold medals on the day and providing the motivation Coach Ford’s JV8 needed to earn their first gold medal of the season.  Coach Apicella’s novice 8 also took home a gold medal securing quality points for the team and adding to the point total.

The varsity girls won four races, along with the JV and Noivce girls adding to the win column to put the girls team at the top along with the boys.  The girls were led by the Junior 4, which tripled up to also row as the senior 4 and as one half of the varsity 8. The group of Danielle Swan, Alaina Feaster, Barbara Benda, Daniella LaRosa, and Mackenzie Moraski did as they’ve done all year, winning all four of their races: their senior four heat, the varsity 8, the junior 4, and the senior 4 final.  The senior 4 final was perhaps the closest race all day, with three lead changes and a small margin of victory of roughly 1 ½ seconds, and served as the win that put Nutley ahead of Kearny for good. The lightweights, Marissa Daly, Meghan Mackel, Jazzy Delamerced, Sara Araujo, and Jennifer Ariola, did their share too, winning their light 4 event and serving as the other half of the varsity 8 in its win over Kearny and North Arlington. Junor Varsity rowers Paulina Giron, Caitlin McCue, Vivienne Dotoli, Erin Veltre, and Alexis Nguyen, won thier four race to collect valuable team points.  The novice girls rowed  in four events and came up with a win in the novice 8 to help secure the trophy for the girls’ team.

The Efficiency Trophy was newly added this year and modeled after the award presented at Canadian Henly to provide an opportunity (particularly for smaller programs) to earn a trophy based upon winning percentage of races entered. By virtue of their 10 overall wins, The Nutley Raider Rowers took home the Efficiency Trophy to complete the sweep.

No Events This Week

Events are added by athletic staff.
View All Events