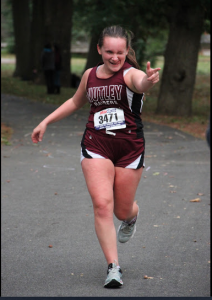 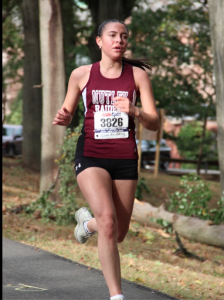 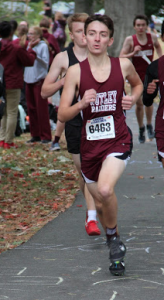 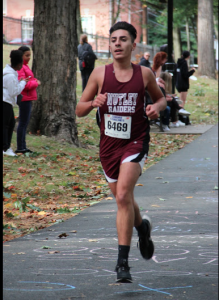 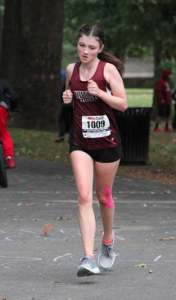 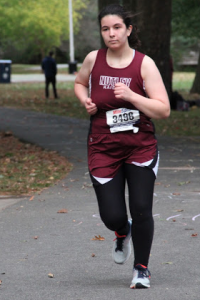 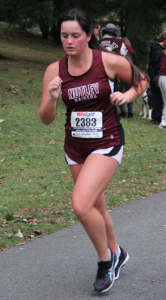 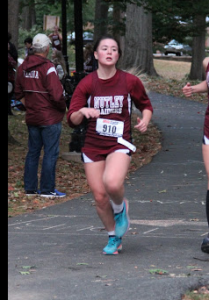 Despite winds that took down trees and reached gusts of over 43 miles per hour, the Nutley Raider Cross Country Team hosted the 9th annual Pizza Invitational against local rivals Bloomfield, Belleville, Cedar Grove, and Verona.  The Girls Varsity and JV teams, led by junior Tiffany Miruelo and freshman Beth Christman respectively, were able to come away with team wins in their races. The Boys lost the varsity team race to Verona on the 6/7 runner tie breaker and the JV team finished 2nd to Bloomfield. Powered by juniors Kaitlin Mui and Saumya Dwivedi, the Nutley co-ed pizza eating team took down Verona in the “Which Team will Eat the Most Pizza at the Pizza Invitational”.

The Girls Varsity race went off first, and the Raiders were able to place all 7 of their runners in the top 11 positions.  They won the meet with 24 points, Bloomfield was second with 44 points.  As they have been all season, the Raiders were paced by junior Tiffany Miruelo who led from the gun and crossed the line in 17:55.  Her time made her only the 8th girl harrier in NHS history to break the 18 minute barrier on the vaunted paths of Yanticaw Park. When reached for comment by the 4th estate at the Turtle Back Zoo’s Post Meet Press Conference, Miruelo commented, “I am glad that I raced well and won.  Breaking 18 minutes has been a goal of mine since yesterday when Coach Ryan showed me the top ten performance list.  I am even gladder, if that is even a word, that I didn’t get hit with a tree limb during the race. There was a scary moment or two where I swear I thought I was going to take one of those big branches in the noggin.”  Placing 4th overall in the race and 2nd for the Raiders was freshman Erica Spina who crossed just in front of junior teammates Morgan Defluri(5th overall in 19:24.7) and Ava Tucker(6th overall in 19:36).  Spina crossed in 19:24.3, which made her the 5th fastest freshman in NHS history.  Crossing nest for the Raiders was senior co-captain Gianna Marinaro who was 8th overall in 20:04.0, while freshman Sarah Gibney was right behind her at 20:04.2 for 9th place overall in the race.  Gibney’s time was the 10th fastest ever run by a 9th grader on the home course.  Maddy Seckler was 7th for the Raiders and 11th overall in 20:24.

The Boys varsity team narrowly lost the team title in a very close race with Verona and Bloomfield.  Meet officials had to go to the always nerve-wracking 6/7 tie breaker  to decide the winner.  Verona and Nutley both had 46 points through the first 5 runners, while Bloomfield was right behind with 48 points.  The tie breaker saw Verona’s 6/7 runners tally 40 points, while Nutley’s 6/7 runners tallied 42, giving Verona the team win.  The Raiders was paced by junior Sean Bernardo, who just missed breaking the elusive 15 minute barrier on the home course, was 2nd overall in 15:07. Bernardo’s time is the 7th fastest ever run by a junior on the home paths. Crossing next for the Raiders was junior Anish Kumar in 16:02 which was 7th overall. Senior Nick Duca grabbed a top ten finish with his 16:18. Brian McCormack was 4th for the Raiders in 16:43.  Tyler Chang crossed in the 5th spot for the Raiders in 16:57.  Luca Vespa(17:02) and Jimmy Bernardo(18:48) were in the 6/7 spots for the Raiders.

The Raiders are next in action on Friday November 1 at the Essex County Championships.  The races are held on the ridiculously  fast paths of Brookdale Park.

No Events This Week

Events are added by athletic staff.
View All Events